By David and Jasmine Hirsch, May 2020

As you walk along the western edge of the Raschen Ridge, cold winds off the Pacific buffet you, and tendrils of fog follow you amongst the vines. Here the Ridge is a knife’s edge, exposed on all sides to the elements. These vines produce wines of body, weight and a sexy intensity. 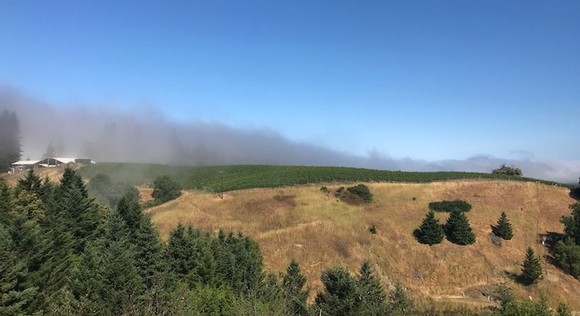 Fog from the Pacific encroaching on the Raschen Ridge.

Follow the Ridge to its eastern end, and you will discover a hidden vineyard. Protected, idyllic and sheltered, it's like another world. From here you have a 270 degree view: all of Hirsch is laid out before you, and yet you're hidden in a secret garden. These vines produce ethereal wines: delicate yet persistent, complex yet charming.

The western section shone bright from a young age, like a preternaturally gifted child. From their youth, the vines produced energetic, self-confident, naturally balanced wines. Meanwhile the hidden eastern section was a bit of a red headed stepchild. Stressed soils complicated by undulating swales led to many years of uneven fruit development. It was only with time that the vines adapted and finally in 2014, they began to reveal the seriousness of the site.

Deep swales on the eastern side of the Raschen Ridge.

The Raschen Ridge Pinot Noir is the happy marriage of these two opposite expressions. They coexist on the Raschen Ridge, a microcosm of the San Andrean complexity that defines all of Hirsch. And they result in a wine that seamlessly combines self-confidence with elegance, hedonism with complexity, and pleasure with intrigue.

The Raschen Ridge has a unique expression. Our ranch is defined by its complexity. It’s difficult to find similar fields due the variation in soils, micro climate, and topography. On the Raschen Ridge, the slopes are more moderate and the soils more uniform than elsewhere.

The fields were planted in 2002 and 2003. Soil work began in 2001 with thirty pits dug six feet deep, providing the data to draw the block boundaries. The differences were relatively subtle so the total of 7 ¼, acres are subdivided into only seven blocks.

The pH’s across the ranch are very low due the age-long composting of conifers, the heavy rainfall and the clay soils. Most are clay/loams or loams which needed lime amendments, compost and careful ripping prior to planting.

We followed the soil work of William Albrecht, one of the fathers of the organic and healthy soil movement. He saw that poor soil fertility produced unhealthy food and poor health. Along with Rudolf Steiner, who inspired biodynamic farming, he has had a big influence restoring farming to healthy practices. To bring the soils back to health and enhance natural fertility, the soil chemistry had to be adjusted. Within two years our soils’ pH’s, humus levels and mineral balance improved dramatically. Today, using biodynamic practices, the vines are happy, have great balance, give excellent yields and the wines express the natural character of the fields.

Filed 17 went in the following year. Based on a careful analysis of the soils, the 3309 rootstock was selected for the north section as it does well in homogeneous soils with high rock content and low water holding capacity. 101-14 was planted in the south portion with low rock content and higher available water. We have learned that it has matured evenly over slight changes in soil, aspect and slope.

Both blocks were grafted to the heritage Swan clone which Joe Swan, an airline pilot had suitcased from Burgundy and planted in the Russian River. For ten years the vines struggled to find their balance. Now it’s one of our finest fields. The layout is 8’x3’ with 1815 vines per acre. The high density creates more competition between vines reducing vigor which means better overall balance. Yields increase which offers more opportunity to adjust the crop load for even maturation, a critical assist given the variation of soils, slope and aspect.

The Raschen Ridge is part of the grand experiment at Hirsch. Our aim is to explore over time the profound potential of our site in order to discover the best practices for biodynamic farming of the vines, trees and gardens. The winery was built to complete seamless winegrowing in consonant with the terroir. Great care is taken at each step of the viticulture and winemaking. It has been a long journey for the Raschen Ridge to arrive at our level of quality for a single area bottling. It presents a true reflection of its provenance, an essential rendering of the variety, and a wine that will bring pure enjoyment to share with kindred spirits.