When you arrive at Hirsch Vineyards, you are welcomed by the earthly beauty of the Maritime Fields. In front of you, the Pacific glistens, redwoods like sentinels shade the land, and the silence and remoteness speak to its essential, undisturbed nature.

At the top of the ridge are the old Maritime Fields: 3B and 3A to the south, and Blocks 1B and 1A to the north. The younger Block 16 opens in a amphitheater on the western face of the ridge, ready to receive the ocean breezes and fog. Between here and the ocean, just 1 mile away, lies the great San Andreas Fault.

2018 is the first year we bottled the Maritime Fields on their own. Probably due to the complexity of the site and the harshness of the climate, most plantings at Hirsch take fifteen to twenty years to adapt significantly to their home and begin yielding fruit with a resonant signature of the field.

The 2018 Maritime Pinot Noir reminds me of the early William-Selyem releases from our vineyard. They too were of the same Pommard/Mount Eden blend. They too brought forth clearly the signature of the site, the integrity of Pinot Noir and the accents provided by the clones.

This is one of the truest wines we have made. The wine’s body and balance augur a long life, with proper cellaring, granting serial opportunities to experience the unique identity of our site clothed in the enspelling raiment of well-farmed and -vinted Pinot Noir.

I planted the oldest Maritime Fields in 1990. The Maritime plantings were the beginning of my commitment to explore the potential of this site with quality vineyards in concordance with the overarching program to restore the health of the land. 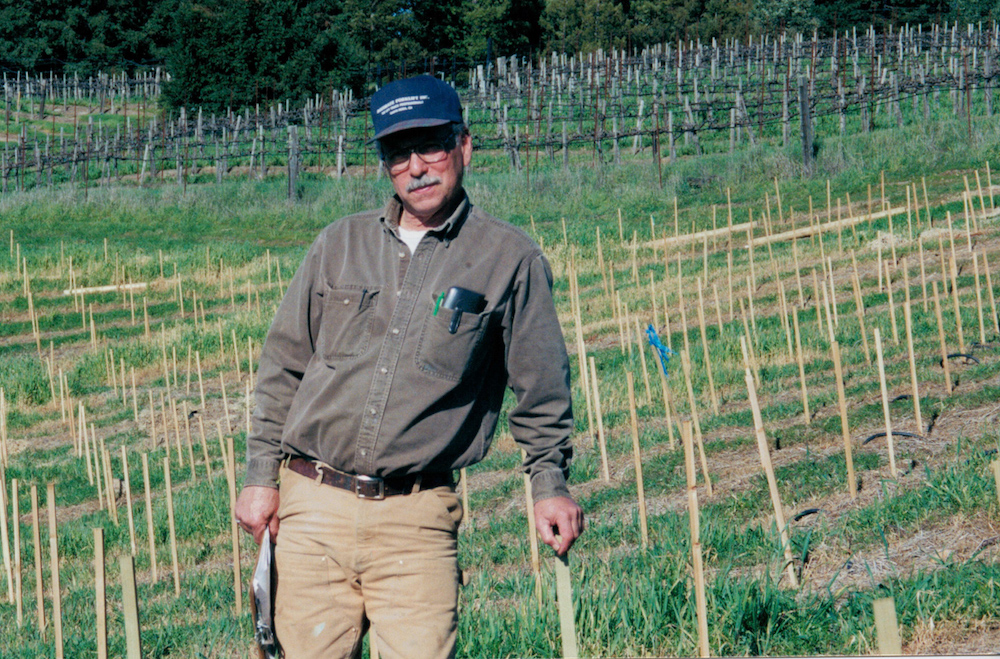 These oldest blocks were planted to AXR rootstock grafted with budwood taken from Mount Eden Vineyards in the Santa Cruz Mountains. The AXR rootstock lost its resistance to phylloxera and had to be removed block by block starting in 1995. A painful yet necessary restart. 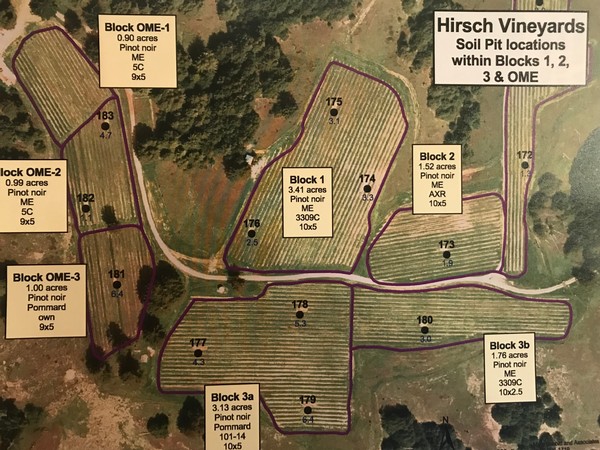 Hirsch has a strong Self Identity forged by its location at the junction of four distinct ecosystems: the marine, the redwood rain forest, the riverine (the vineyards are on ridges surrounded by creeks and a river), and the continental (an exposure to the south and east which invites weather from the Four Corners resulting in occasional snow and frost in May and at times triple digit temperatures in high summer).

The Maritime Fields are the epitome of the marine climate at Hirsch Vineyards. 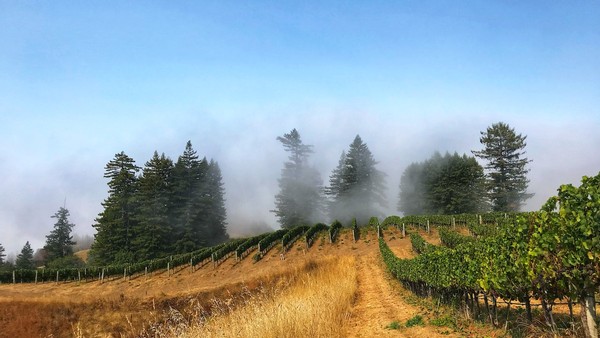 Looking west from Block 3B, as the fog rolls in from the Pacific.

In 1988 I took a class in viticulture taught by Rich Thomas, one of the folks who foresaw the inherent quality in Sonoma vineyards, which until then had been farmed mostly for quantity (farmers held contests to see whose fields produced the most tons of Sauv Blanc). When Rich came up here in 1989, he called the site a “gold mine” for pinot noir.

Rich Thomas brought Richard Smart to Sonoma, the Australian viticulturist whose book Sunlight Into Wine introduced the vertical shoot positioning trellis (VSP) that eliminated California sprawl in order to achieve better quality by allowing sunlight and airflow into the canopy. This marked the time when Sonoma began to change from a source of fruit for jug and generic wines to the farming and production of site- and varietal-specific offerings. This presented ample opportunities for small producers such as Hirsch to make a living by promoting and selling their fruit directly.

Light and airflow became the mantra in Hirsch farming; and the use of the VSP trellis became our Stradivarius on which we play as precisely as possible the compositions written by each of the multitude of mini micro sites occurring throughout our vineyard. This tool plays a key role in the Maritime Fields which face the sea through a gap in the ridge to the west. In cooler, foggier years the incidence of mildew and botrytis pressure is severe. Intelligent ‘playing’ of the VSP gives us the means to help protect the fruit from infection without use of chemical sprays -- essential in an organic, biodynamically farmed operation.

Pinot is the most adaptive of the common red varieties. The plant material in the Maritime Fields is all heritage selections, not industrially produced clones from genetically selected cuttings. Therefore, they have some ‘ugliness’ (viruses, etc.) in them, plus the slight genetic variance due the accretion over thousands of years from being grown in diverse environments with local cultural practices.

Maybe one reason that pinot is so treasured is due its reflection of the vibrant, ever changing, inscrutable nature of life.

THE FIELDS: Block 1A

Block 1A is not quite the most westerly vineyard at Hirsch, but it sits on a rise that leaves its western edge entirely exposed to the wind and fog coming off the Pacific Ocean, just 2.5 miles to the west.

The field stretches to the northeast, where it’s somewhat more protected. Consequently, farming for balance here (as at much of Hirsch) is a serious challenge that frustrates concepts. Our response has been a hands-on, vine-by-vine, row-by-row approach, with continual adjustments demanded by the unpredictable and ever-changing weather and the slow adaption by the plants over time to their new home.

In the 1990s, Williams-Selyem was buying the fruit from this field. Ed Selyem and I walked 1A in 1994, reflecting on how the slight rise and fall away from the ocean effected a change in the ripening of the fruit. The north side of the field declines, which offers a small bit of protection from the marine coolness and occasional fog. Williams-Selyem considered harvesting the north and south sides separately, and to this day we adjust our farming each year to reflect the site’s unique environment.

In response to the phylloxera, in 2007 we replanted 1A using our Pommard-Wädenswil selection of Pinot Noir, taken from the Old Vineyard. The vine density was increased from 875 per acre to 1,815 per acre. 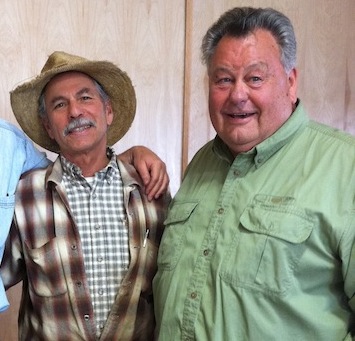 THE FIELDS: Block 3B

3B sits only 50 yards away, yet spins another tale entirely. It faces a gap in the ridge to the west which exposes it to the ocean and moderates the temperature year round. Being close to the Gualala River (only a half-mile distant but 900’ lower) brings coolness and a higher degree of summer afternoon humidity which helps the full acidic maturation of the fruit. These factors bring to the wines the lineaments of the Hirsch site. But nothing in Life is free, so with these gifts come severe disease pressure, which require intensive canopy management.

Planted in 1990 to AXR, the rootstock started to weaken by 1995. Instead of pulling out the AXR, new rootstock, 3309, was planted between the existing vines. In 1999 the old AXR was removed and replaced with 3309 giving the field 1742 vines per acre spaced 2.5’ apart in the vine row and 10’ between rows. Then three cross arms were bolted to the inline trellis posts. Two sets of movable trip wires on either side capture the growing shoots and keep them straight to permit dappled light and airflow throughout the canopy. Two canes from each vine are tied on training wires on opposite sides of the vine to further increase light and air penetration. To attempt to balance the light and heat on either side of the vines, the cross arms were tilted. The Mount Eden clone was retained. It took fifteen years for the replanted field to achieve a high level of site expression at decent (help-to-pay-the-rent) yields. 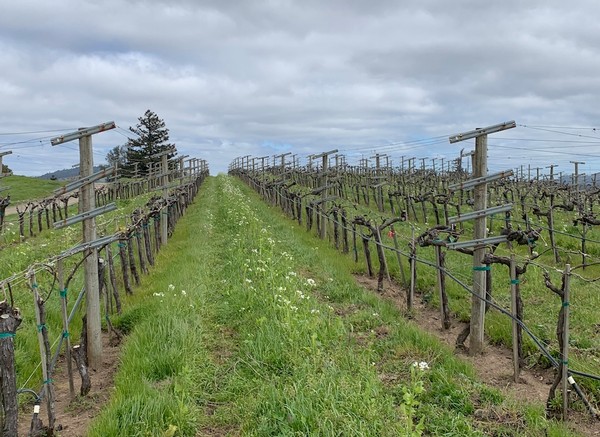 David's unusual trellising system in 3B: to balance the light and heat on either side of the vines, the cross arms are tilted.

THE FIELDS: Block 1B

1B had to be replanted to 3309 in 1997. The Mt Eden clone was retained, and it has been a productive field. As with 3A, we retained a density of 875 vines to the acre spaced 5’ in the vine rows and with 10’ spacing across the tractor avenue. True to the varietal character, the Mt Eden has adapted to its home and makes wines distinct from the other fields in which it has been grafted. (In 2016 as part of this grand experiment we planted self rooted Mt Eden in the Old Vineyard next to two other heritage clones, Swan and Calera. In a few years the wines will begin to tell us the results of the adoption by the site of its new children.)

Field 16 is an entirely different story. It entered this world with the large plantings of 2002-03, our test for graduation from kindergarten in the school of Hirsch farming. And quite the challenge it proved to be. Located in a swale below the Old Vineyard, it is tucked in an amphitheater with redwoods on two sides. Like 3B it’s close to the Gualala and the sea, so is very cool with slow ripening of the fruit. A small spring wells out in the lower section which required the installation of drains before the field could be planted. The soils are mostly shallow with pHs before lime amendments mostly in the 5.2 to 5.5 range, the acidity due the organic material from conifers, heavy rains and the sandstone strata. 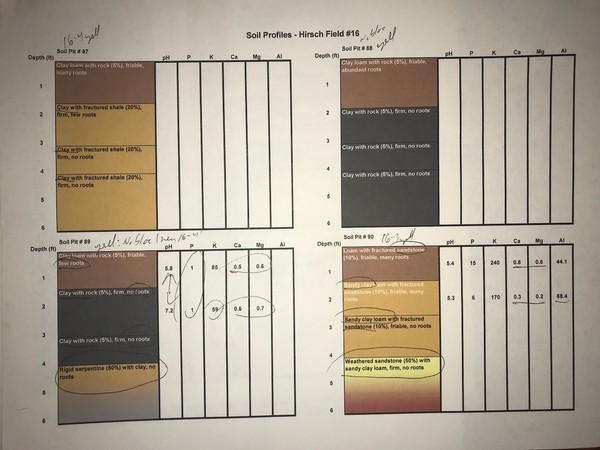 It was a task to draw the blocks to include more or less similar soil types, the aim being to segregate similar soils with roughly the same water holding capacities. Fourteen profile pits, 6’ deep, were dug to help ferret out where the soils changed. In the end the field became a jigsaw puzzle with some vine rows crossing three blocks with different rootstocks and clones – it’s always an adventure to keep the fruit separated by block when picking on dark nights. The rootstocks are 3309, 101-14 and 420A (for the wet areas). This is an extremely rigorous environment given the intense and varied weather inputs, the heterogeneous soils, and radical changes in slope and aspect. A large investment in time and energy has been expended to bring the vines into balance in growth and ripening. 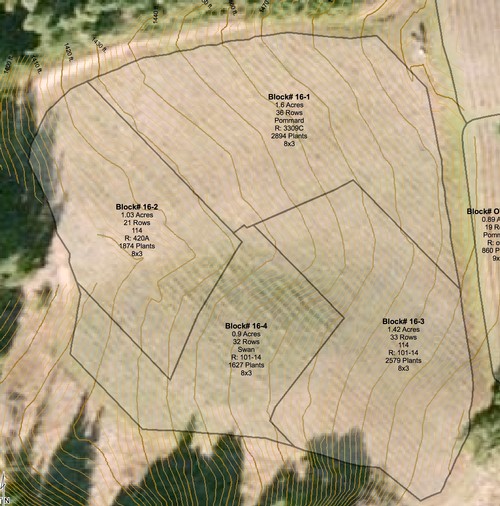 Map of Block 16, one of the most complex plantings at Hirsch Vineyards.